What is Breakthrough Strategy – And Why Do We Need it Now?

When we talk about Breakthrough Strategy we get some quizzical looks. That’s not surprising as it’s a new concept which breaks with tradition. Here Dominic Pride sets out what it means, when you can use it and a host of other questions.

So what exactly is Breakthrough Strategy?

It’s like this: take techniques from breakthrough product development. Apply them to the process of generating a strategy.

Along the way we adapt (steal) elements of design thinking to produce inspired responses to disruption.

It’s the lovechild from when The Lean Startup had a one night stand with design thinking.

How is it different from strategy as we know it?

It’s Quick. Strategy in corporations has traditionally been a rarified and abstract discipline led by internal divisions or external consultants. It’s the kind which is signed off at global board level and leads to a three-to-five year implementation plan.

What’s not working is the speed at which this process addresses digital disruption. Emerging technologies and low barriers to entry let startups gain a foothold in weeks not months. They weren’t invented when your big strategy was signed off.

Breakthrough Strategy moves at the same speed as the disruptors.

In the months it takes for a corporate to create, sign off and implement a strategy, a disruptive startup can have gained a hold.

So you’re looking to replace the strategy division ?

Absolutely not. We break off the difficult-shaped problems which don’t fit into the grand plan. The ones which everyone’s talking about but no-one wants to address.

We break then off one chunk at a time and empower teams to crunch a response.

Within a month we can take a single problem and feed the findings back into the grand strategy. This can let organisations course correct in between the major strategy updates which take place every 2-3 years. 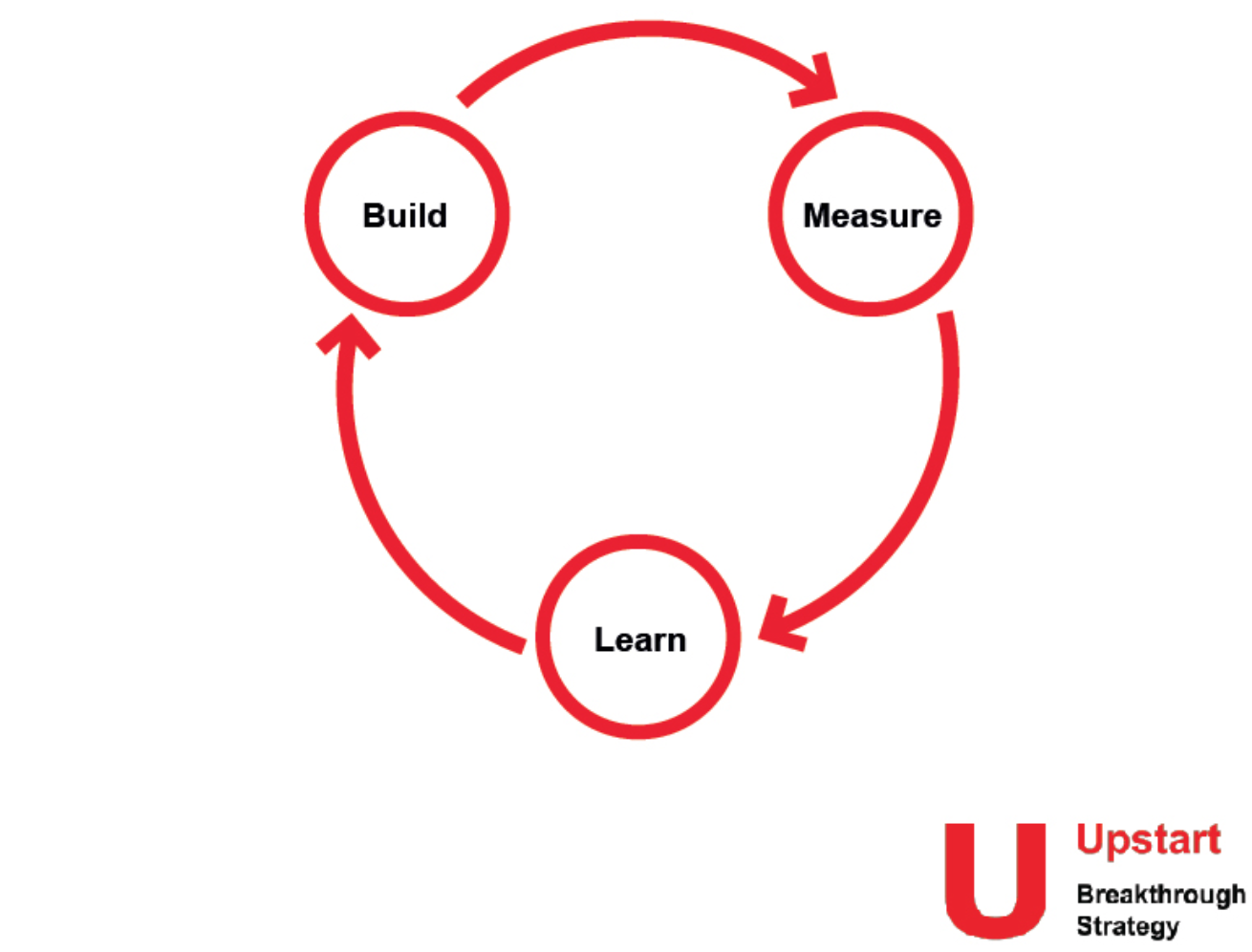 It’s a way to update an agreed strategy with the reality of disruption.

What have you learned from startups ?

Action Bias. The next person to tell an exec in a corporation “think like a startup” deserves to be frogmarched out of the building. Let’s be clear: you can think whatever you want, but in BigCo things will be hard and take ages. The system is designed to mitigate against change.

We recognise that. but we’ve lifted and shifted a few things – team, time and tools – that apply on a human level in any environment and which can generate ideas and plans at speed.

Teams: One reason successful startups move fast is way teams are assembled. The size of the teams – ideally around 6-8 people in the same place – enables short lines of communication. Bringing diverse skills (such as front-end, back end, UX) enables real-time problem solving and collaboration. It’s the opposite of the silo-ing of skills we see in corporates. 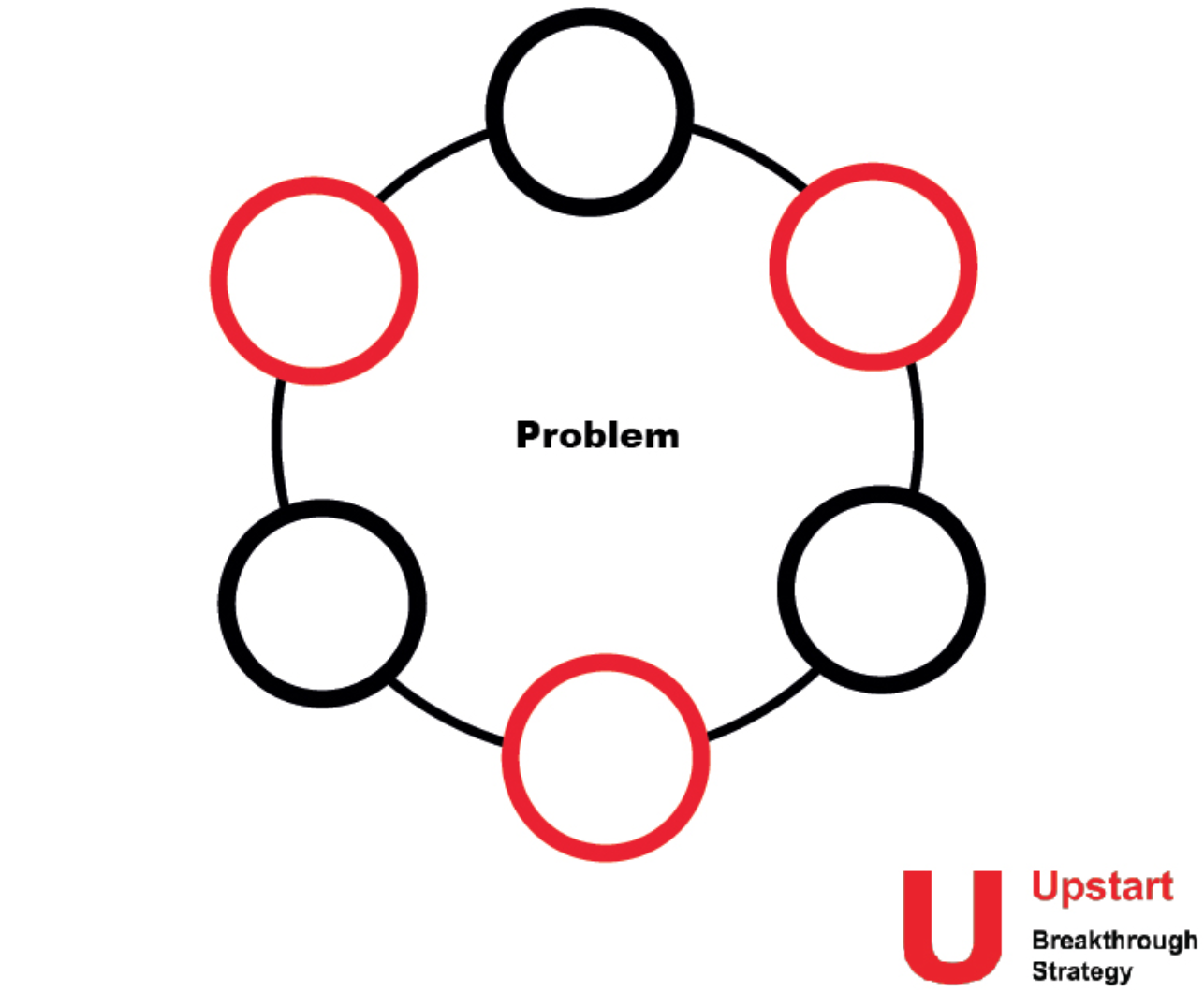 Putting a blend of skill sets around a single problem produces focus and speed.

Tools: There’s a raft of collaborative tools which allow teams to work together and shorten communication and workflow We use accessible digital tools (enterprise versions of Slack, Trello and GSuite). used in every startup to cut down the barriers.

We also use design thinking, stimulus materials and canvases to get the juices flowing. We’ll draw rather than create a powerpoint any day, and we can capture and clean drawings on the fly in seconds.

Time: We work in sprints to avoid bloat and the “nearly done” syndrome. Constraining time drives answers and speed, the kind you need to respond

You don’t have to think like a startup. But you can borrow their tools.

I normally get a world class strategy deck. What’s the output here?

At the highest level this process values outcomes over outputs.

On of the four principles is “working software over comprehensive documentation”. An ugly, unpolished Minimum Viable Product (MVP) after a week which you can use to test your hypothesis is better than a polished version a month later.

In the same way, our output at the end of each sprint is a Minimum Viable Presentation – an often ugly but understandable summary of the team’s activity but which serves as a working document and record.

Digital disruption doesn’t call for another 140-page “deliverable”. It calls for a team response.

Fast and Messy. We’ve written a separate post about this – but there are three main phases – “sprints” – short, focused collaborative sessions with a single clear objective, namely Understand, Think, Plan.

At the end you have knowledge, ideas and a plan created by a team, not by a consultant. Check out Teppo Felin’s MIT Review article When Strategy Walks Out The Door as to why this is important.

Done is better than perfect when it comes to beating disruption.

When would I use it?

When you can’t do digital. You’d use breakthrough strategy when you have a difficult problem caused by digital, or even when you don’t have a clear problem.

Got a digital marketing problem? Call an agency. We know some great ones and happy to direct you towards them.

If you have a game-changing, disruptive digital force coming towards you, that’s our bag.

Isn’t this just an innovation workshop?

We have no fixed idea about what the “idea” is at the end. It could be a product, business model, acquisition, partnership programme or culture change.

The crucial difference is at the end, teams commit to what they have ideated.

The process that generates new product ideas fast can be used for strategic thinking and planning.

Does this mean I’ll get a breakthrough ?

If you built a laboratory would it guarantee you a scientific breakthrough? No. It’s the quality of the brainpower, the support and the approach which get you there. Add in some painstaking work and some failure and you’re setting the right conditions.

We can create the conditions for teams to find a working strategy and put it into action. Crucially we can offer momentum, hope and direction as an antidote to paralysis.

What is certain is that doing things the same way in a changed world won’t help.